San Andreas: A Foreshock of Things to Come 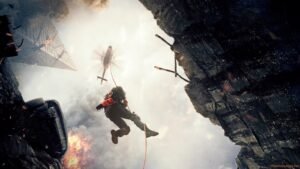 In one of 2015’s biggest blockbuster movies San Andreas, we become eyewitnesses to the cataclysmic destruction of the cities of the west coast of the United States due to a series of extremely large earthquakes and the tsunami one creates. The images in the film are troubling, especially for residents of west coast cities like Los Angeles and San Francisco, because the west coast is plagued by earthquakes and experts have been warning about “the big one” hitting at some point in the near future. Scientists have criticized the movie as an over exaggeration of what can actually happen in California. Although this is generally true, the movie still does a great job of illustrating the sheer power of the geological forces upon which our cities precariously rest (read New Yorker article on the Cascadia fault, or The Atlantic’s article on the New Madrid Seismic Zone). The truth is, these forces are capable of doing damage beyond our imagination. In fact, the Bible predicts an hour, on one day just prior to Christ’s Second Coming, when every major city in every nation of the world will fall due to a massive, simultaneous, and global series of earthquakes.

It is a fact that we have seen a spike in earthquakes around the world, and their magnitude, over the last 25 years. It is also true that Jesus predicted that in the end times there would be an increase in the number and magnitude of earthquakes worldwide and that this would be one of many signs of His soon return. Jesus said,

“For nation will rise against nation, and kingdom against kingdom. And there will be famines, pestilences, and earthquakes in various places. All these are the beginning of sorrows (birth pains).” (Matthew 24:7-8)

Certainly we have seen this increase (and an increase in all of the signs) more and more in our day, just like a women’s contractions increase and get stronger the closer she gets to birth. This seismic activity will culminate, one day, in a massive, worldwide quake just before Jesus returns to establish the Kingdom of God on earth.

One of the reasons that this new movie, a special-effects masterpiece, has so many Christians talking, is that it shows with great detail and accuracy, with stunning visual effects, what the mass destruction of major cities due to a series of large earthquakes could look like. It is surprising to Christians that anti-Christian Hollywood would depict fictional events on film that mirror the biblical events coming on earth as a result of God’s wrath on sinful, destructive humanity. Those producers don’t know what they are doing, but through His providence God is sending us a loud wake-up call to repentance of sin and faith in Christ through these kind of dire, last days depictions.

Let’s take a look at the Scriptures describing the last and most catastrophic earthquake that will take place worldwide at the end of the age, starting with the prophet Isaiah.

“The earth is violently broken,

​​The earth is split open,

​​The earth is shaken exceedingly.

The earth shall reel to and fro like a drunkard,

​​Its transgression shall be heavy upon it,

​​And it will fall, and not rise again.

​​It shall come to pass in that day

​​That the LORD will punish on high the host of exalted ones,

​​And on the earth the kings of the earth.

They will be gathered together,

​​As prisoners are gathered in the pit,

​​And will be shut up in the prison;

​​After many days they will be punished.

​​
Then the moon will be disgraced

​​And the sun ashamed;

​​For the LORD of hosts will reign

​​On Mount Zion and in Jerusalem

​​And before His elders, gloriously.”

First off he says, “the earth,” meaning the entire planet will “reel to and fro like a drunkard.” Secondly, we know it is the last quake in pre-millennial history because he says “the earth will fall, and not rise again (in the same condition).” Thirdly, we have confirmation of the end times Great Tribulation judgment because of the use of the phrases “its transgression shall be heavy upon it” and “the Lord will punish” and “after many days they will be punished.” These verses describe an aspect of the Great Tribulation, a seven year period of God’s judgment on the world preceding the Second Coming of Christ to rule and reign on earth. Isaiah connects this giant global quake to the time Jesus spoke of when the moon turns to blood and the sun is darkened. This all happens just prior to His return.

“Immediately after the tribulation of those days the sun will be darkened, and the moon will not give its light; the stars will fall from heaven, and the powers of the heavens will be shaken. Then the sign of the Son of Man will appear in heaven, and then all the tribes of the earth will mourn, and they will see the Son of Man coming on the clouds of heaven with power and great glory. And He will send His angels with a great sound of a trumpet, and they will gather together His elect from the four winds, from one end of heaven to the other.” (Jesus, Matthew 24:29-31)

This global series of simultaneous earthquakes happens at the end of Armageddon, the final world war that continues to the end of the Great Tribulation and to the return of Christ.

“And they gathered them together to the place called in Hebrew, Armageddon. Then the seventh angel poured out his bowl into the air, and a loud voice came out of the temple of heaven, from the throne, saying, ‘It is done!’ And there were noises and thunderings and lightnings; and there was a great earthquake, such a mighty and great earthquake as had not occurred since men were on the earth. Now the great city was divided into three parts, and the cities of the nations fell. And great Babylon was remembered before God, to give her the cup of the wine of the fierceness of His wrath.” (Revelation 16:16-19)

Notice the Apostle John tells us “there was a great earthquake, such a mighty and great earthquake as had not occurred since men were on the earth” and “the cities of the nations fell.” In chapter 18 of the book of the Revelation of Jesus Christ, he makes it clear that this comes “in one day… for in one hour your judgment has come.”

“Therefore her plagues will come in one day–death and mourning and famine. And she will be utterly burned with fire, for strong is the Lord God who judges her. The kings of the earth who committed fornication and lived luxuriously with her will weep and lament for her, when they see the smoke of her burning, standing at a distance for fear of her torment, saying, ‘Alas, alas, that great city Babylon, that mighty city! For in one hour your judgment has come.’” (Revelation 18:8-10)

While reading the Old and New Testaments of the Bible, we become acutely aware of the fact that God is going to judge the world for sin, for disobedience and for rejecting His Son Jesus Christ, and we know that there will be a series of demonic, man-made and natural disasters just before Christ’s return. So, when we see a movie like San Andreas depicting this kind of seismic catastrophe, we cannot help but think of that time to come. Jesus said of that time,

“For then there will be great tribulation, such as has not been since the beginning of the world until this time, no, nor ever shall be. And unless those days were shortened, no flesh would be saved; but for the elect’s sake those days will be shortened.” (Matthew 24:21-22)

Looking at the world today, who can deny that the planet is ripe for judgment? Even many unbelievers think that “mother earth” is angry at people for their treatment of “her” and are predicting catastrophic consequences to come. Experts in all fields, such as defense, economics and ecology agree that we are beyond the tipping point and that big trouble is ahead for the inhabitants of this planet. If they only knew and believed that God has been warning us of this day for thousands of years through His Word, the Bible, and that God has made a way out of this mess for all of humanity. Through the Eternal Son of God, Jesus of Nazareth, the Messiah of Israel, “all who call on Him will be saved.”

Why do we need a Savior?

But, God has made a way for us to be forgiven of our sin and made righteous in His sight, if we are true in our heart toward Him. God knows our hearts. If we can admit that we have done wrong against Him, repent of that sin and believe that Jesus is the Son of God who died to make us right with God through faith in Him, then God will be merciful and will forgive our trespasses. He will remove the punishment of sin, which is death, and give us eternal life with Him.

“But now the righteousness of God apart from the law is revealed, being witnessed by the Law and the Prophets, even the righteousness of God, through faith in Jesus Christ, to all and on all who believe. For there is no difference; for all have sinned and fall short of the glory of God, being justified freely by His grace through the redemption that is in Christ Jesus, whom God set forth as a propitiation by His blood, through faith, to demonstrate His righteousness, because in His forbearance God had passed over the sins that were previously committed, to demonstrate at the present time His righteousness, that He might be just and the justifier of the one who has faith in Jesus.” (Romans 3:21-26)

“For God so loved the world that He gave His only begotten Son, that whoever believes in Him should not perish but have everlasting life.” (Jesus, John 3:16)

Dear friend, pray to our Creator to forgive you of your sin. Receive Christ in your heart by faith and receive the free gift of God, the most wonderful gift that could ever be given, eternal life. God longs to be your loving Father. He loves you and wants to save you from your sin and His right judgment coming upon our world in the near future.

Visit Blue Letter Bible for resources on the Bible and the Christian faith.

How to Know God

We’ll send you new content as soon as it is posted and keep you up to date on how the Lord is working at Walking With Jesus Ministries.